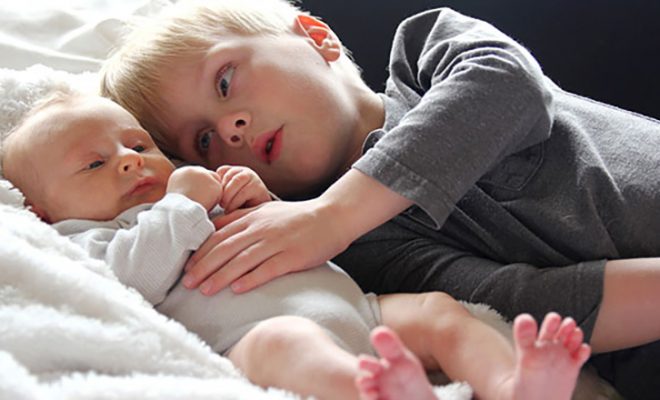 Sibling age gaps: The benefits of a big one

Recently, at a birthday party, a relation of the birthday boy began talking to me about my children. In the discussion, they asked about the age of my children and I let him know that I had two boys, one aged nine and my recent arrival is four months old. I could tell by his reaction that it took him by surprise,

Well, initially, I wanted to shout, “It’s none of your bloody business!” However, I held my tongue and instead I explored three choices to his response. I could:

So, I told him the truth, which afterwards made me think about the societal norms around sibling age gaps.

It would seem that the norm is to have your children close together and that is what I thought I had always wanted. My two brothers and I have that ‘perfect’ two-year gap in between the three of us, after all.

When I had my first child back in 2008, I was adamant I would have my second child a couple of         years later. They would grow up together, be friends and life would be peachy. As life turned out the relationship with my son’s father broke down, I became a single mum, and the idea of having children close together became a distant memory.

Now with the birth of my second child almost nine years later, I am finding strangers very curious as to why I have had such a big gap. Whether it be my new beauty therapist, shop attendants or even my mortgage broker, the question has been asked multiple times and my youngest is only four months old!

Having lived the nine year gap between my two sons, I feel there have been so many advantages for myself and my boys.  Here are a few:

I enjoy the days spent with my four-month-old as we can have one-on-one time when my nine-year-old is off at school. I can ensure learning is taking place, play time is fun and cuddle time is free from the pressure that my nine-year-old may be feeling left out. My eldest has also had almost nine years of one-on-one time too, which I think has really strengthened his character. He has independence and maturity beyond his years and I feel our bond is so strong because of the years we’ve spent together.

Cuddles and reading books together are only a couple of examples that already facilitate such a strong brotherly bond, which I am certain will last for years to come. My eldest is thrilled that his little brother now laughs at him and goes to great lengths to clown around and get the adorable little giggles from him.

The extra pair of hands

My eldest has become almost like another adult in the household. He will grab the burp cloth, the box of wipes and will fetch a dummy without fussing. He will even do it on his own accord because he has observed me with my hands full. He will hold my four-month-old when he is grizzly or when I am about to dish up dinner and ‘witching hour’ has set in. It has made life much easier and not only does it give me a small break, it gives my eldest the feeling of responsibility and achievement.

Understanding of a baby’s needs

I sat my nine-year-old down just before my youngest was born and explained that babies need lots of attention when they are first born because they cannot do anything for themselves. I told him that some children feel left out and get angry that they are not receiving much attention, which is a completely normal feeling, and with patience and understanding this short time will pass and attention will become equal. My eldest understands completely and when I apologize to him for not having much time for him on a given day as his brother has been unsettled, he responds with, “It’s okay mum, I’m fine”. I believe he really is fine as he doesn’t see his baby brother as competition for attention, rather an adorable bundle of joy he too can love and nurture. This level of maturity and understanding has made transitioning from an only child to a sibling so much smoother.

At the end of the day, there is no right age gap for any family. Whatever gap you have, you will embrace it and love it because there are no rules to creating a family. Don’t worry about what is expected of you, what your friends are doing or what the so-called research tells you. There are always going to be pros and cons for every situation, it’s just what you make of them.

Amanda is a teacher currently on maternity leave (and loving it!) She enjoys a game of netball and spending time with her boys.